Wisconsin’s Own Danish Pastry, The Kringle

I am a Wisconsinite. Go ahead, laugh. As much as I understand why the cheddar and beer stereotype (and Favre’s latest exploits) have turned us into a national joke, you should all be secretly jealous. We have something you don’t: Kringle.

A circular pastry that originated in Denmark, the kringle is only common in its home country and in Racine, Wisconsin, thanks to waves of Danish immigrants in the 1880s who had enough sense to move to Wisconsin. Some of my favorite Saturday mornings were had over a cup of coffee and a cream cheese kringle. 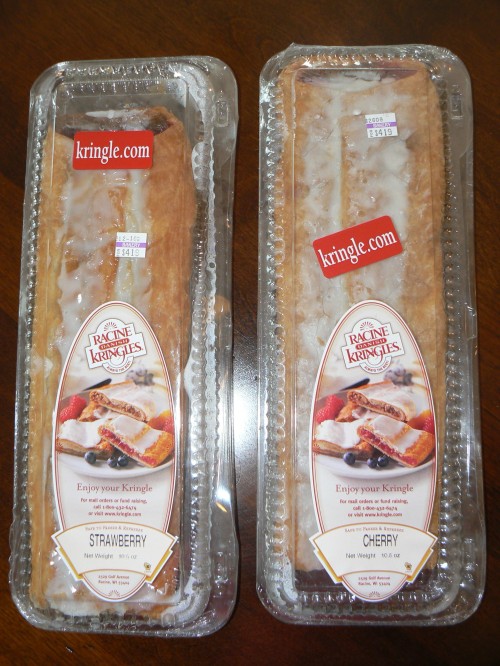 Even grocery store kringle will blow your mind. The secret is in the Danish Weinerbrod dough, which layers like puff pastry sheets but remains soft instead of crisping in heat. Inside is usually fruit filling, and a light, sugary glaze similar to that of a donut coats the top. Strawberry and cherry fillings are most common, but you can also find almond, apricot, pecan, apple and cream cheese, in most places kringle is sold.

While you can often find smaller portions as pictured above, kringle is traditionally made in a loop shape. Cutting and serving it isn’t quite the art some make it out to be, unless you made it from scratch, in which case you have every reason to demand it be cut correctly. I recommend the version on the left-hand side for easier coffee-dunking.

I’ve never been ambitious enough to make my own kringle, but if you currently have an oven in your apartment (you’re one-upping me), give this pecan and walnut kringle recipe a try. For the cheaters: No matter what shape your store-bought kringle takes, pop it in the oven at 300 F for 15 minutes and toss the packaging. The pastry still has all the complicated layers only a Danish-style bakery can replicate, and all the heat and aroma of being fresh from the oven.

And you thought we were fat because of the cheddar.

Milk caramel needs a translation to Spanish to earn the sweet, sultry name it deserves, which here is dulce de leche. It is probably inaccurate to call dulce de leche an obsession in Argentina; it is so integrated into the everyday life, culture and food — especially sweets — of this place that it occupies a realm entirely different than obsession. It’s so present and normal it’s nearly negligible.

Dulce de leche comes to its sticky, sugary goodness through the slow heating of milk and sugar, which caramelizes. While the origins of dulce de leche are up for debate, it is a beloved treat throughout Latin America, where it also goes by names like manjar, arequipe and cajeta. It did, however, take Haagen-Dazs introducing dulce de leche as an ice cream flavor worldwide in the late ’90s to get many outside Latin America to taste it.

Chocolate with almonds and dulce de leche Freddo gelato, by Karina for TKGO

Ice cream in Buenos Aires bears a close resemblance to Italian gelato, but what they have here that they don’t in Italy is a slew of dulce de leche flavors. Dulce de leche with brownie, or nuts, chocolate chips or “classic.” I’ve found dulce de leche to be the ideal accompaniment to any flavor of the chocolate persuasion.

Argentine alfajores consist of two sweet biscuits stuck together with a filling of dulce de leche and then — as they’re often found here — coated in chocolate. They’re sold in cafes, bakeries and supermarkets, and they are just as epic and decadent as they sound. For more about the famous alfajores at Havanna, read Tara’s TKGO City Guide listing here.

Fat Tuesday is also, appropriately, called Pączki Day wherever there are Poles or Polish immigrants — in this case, the greater Chicago area. The jelly donut-like pastry, which means “little package” in Polish, is deep-fried and stuffed with custard, fruit filling or cheese, and topped with sugar glaze or powdered sugar. Apparently, pączkis (pronounced “poonch-keys”) were first made to quickly and deliciously use up eggs and lard prior to Lent, which the Roman Catholic church prohibits during the pre-Easter period.

Bennison’s Bakery in our very own Evanston, Illinois hosted a pączki-eating contest to benefit Haitian relief efforts this past Saturday, where six teams of two had five minutes to consume as many of the pastries as possible.

It was a little much to watch the teams wolf down the gooey pastries, but it didn’t stop us from wanting to taste some for ourselves after the contest. Luckily, the bakery had extra trays of cheese, cream, apricot and raspberry pączkis, which they offered to spectators for free(!). The traditional flavor is prune, which Bennison’s refrained from including in the eating contest, probably with the contestants’ digestive systems in mind.

The pastries are delicious, with a rich filling encased in a fluffy dough exterior, and Bennison’s strikes the ideal proportion of filling to pastry. Prune, apricot, cheese, raspberry, custard and apple pączkis are $1.28; the special whipped cream and strawberry-filled pączkis are $1.96. Stop by Bennison’s to try one! (Tara likes the prune, Karina favors the cheese.)