In my first post about my new home city of Buenos Aires, I spoke of the beat of the city, and how the energy here is palpable. Nothing demonstrates that musicality so vital to this city’s personality better than the weekly, high-energy percussion show called La Bomba de Tiempo. 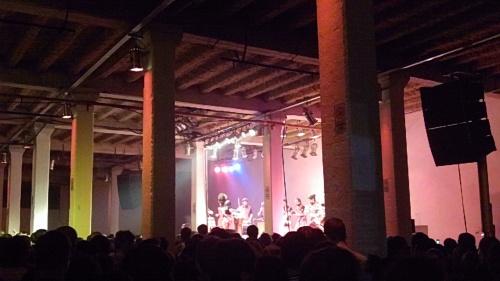 The group of distinguished percussionists plays together every Monday at the Ciudad Central Konexbeginning at 7 pm with guest performers under the direction of Santiago Vazquez. The show, which costs 25 pesos at the door or 20 pesos in advancea, attracts an absurdly fun, young crowd — many of whom would qualify as Argentine hippies — that spends the duration of the show whistling, clapping, smoking, stomping, dancing, swinging their hair and guzzling liters of Quilmes beer. The director interacts with the crowd throughout the performance all while leading the Bomba percussionists in some impressive structured improvisation.

To get an idea of the sound, energy and audience of a typical Bomba show, check out the TKGO YouTube video below. Parts of the video are a little shaky, which I apologize about, but there was no chance I was standing still for any moment of this performance.

After the World Music Festival closed last week with a (free!) blowout night at the Chicago Cultural Center, we have some new favorite bands. Check out our reviews below, and hear for yourself with our audio and video.

These two Poles played the whole concert with furrowed brows, at least until the killer drum solo near the end. The result of this intense concentration? A simple lineup of instruments (heavy on the trumpet, snare, and cymbals, with an occasional layer of electronic tones), that produce a powerful sound somewhere between jazz, Big Band and what you’d imagine the Star Wars theme song could have been. Beware: it grows on you fast! Hear for yourself here.

Under a stained glass dome bigger than an Olympic swimming pool, Rahim Alhaj played the oud. The oud is an Iraqi string instrument that looks like a large sitar. Alhaj was forced to leave Iraq because of his activism against the Hussein regime, so he moved to the U.S. to continue composing and playing. The notes are enchanting and plucky, reminiscent of some of the traditional Indian ragas. The large drum adds a deep, soothing, textural harmony that made us melt in our seats. Listen here.

This group of a cappella men may have looked stiff and slightly uncomfortable in the spotlight, but there was nothing nervous or uncomfortable about the music when they began singing. We can’t admit to hearing much originality — it’s still a cappella — but it’s great a cappella, and it’s in Croatian. Their harmonies ran dangerously close together, but each man held his own.

These Brazilian crooners took obvious inspiration from Barcelona’s music scene (their songs are mostly in Spanish with some English), and they also credit Angola, Africa and the U.S. for influencing their compositions. The folclórico/coffeehouse-sounding beats come from two plugged-in guitars and a drum set. So where’s the spice? The bassist also plays a mean organ-flavored keyboard, and once even stood still, closed his eyes and put his hands together in a hollow-sounding flamenco clap. This is a TKGO fave!

Their performance was like a big paint party with drums and players dressed in variations of zippered red and black jumpsuits. The Congolese drummers smiled, laughed and bounced to the rhythm throughout the performance. They’re another TKGO pick; we wanted to jump right in! Hear it here.

All three members of this group sat on the floor, singing and drumming deep bass notes in a traditional Carnatic tune (from India). It seemed a little esoteric at first, but a few minutes in we were mesmerized.