The oldest of seven existing Baha’i temples in the world 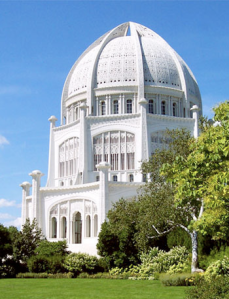 The Baha'i Temple in Wilmette, courtesy of the official site

The Baha’i faith was founded in 1844, making it the youngest monotheistic faith in the world. It emphasizes the commonalities between the world’s major religions, calling them “part of a single, progressive process through which God reveals His will to humanity.”

After the oldest temple (in Turkey) was demolished in 1962 after earthquake damage, Wilmette’s temple, completed in 1953, became the oldest in the world.

The auditorium is open from 6 a.m. to 10 p.m. every day, and prayer services are held at 12:30 (and because of the nature of the Baha’i faith, all are welcome). I love running in this area in the summer, and I always stop to stretch and walk around the gardens on the grounds of the temple. When service is over, walk inside to admire the architecture — no one judges you for your running apparel. Few people are there (when service isn’t going on), making it a peaceful place to explore your thoughts or just take in the brilliant stained glass ceilings in the sunlight.