The Art Institute of Chicago

The second largest art museum in the country, situated on the edge of Grant Park 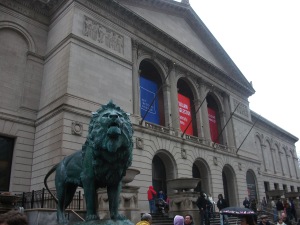 Outside the Art Institute, by Karina for TKGO

Brat pack director John Hughes shot part of his love letter film to Chicago, Ferris Bueller’s Day Off, in the Art Institute. It was the first time a movie had been shot in the museum, and Hughes called it “a self-indulgent scene of mine — which was a place of refuge for me, I went there quite a bit, I loved it. I knew all the paintings, the building.” It’s hard not to fall in love with the Art Institute, which sits majestically between Millennium and Grant parks.

The fine art museum’s collection spans 5,000 years and contains more than 30,000 works from various disciplines. What many visitors don’t realize is that the Art Institute is also a school, with about 3,000 matriculated students studying different aspects of art theory and practice. (For more on the famous SAIC fashion design program, read this TKGO post about NightWalk 2010.) The Thorne Miniature Rooms section is one of my favorite elements of the museums collection, and it features 68 meticulously accurate recreations of European and American model rooms spanning seven centuries.

In May of 2009 the museum’s Modern Wing opened, which (as implies) houses the Art Institute’s modern work. It was also an invitation for the Art Institute to get a little edgier, with the hosting of such events as the suggestively cultured “After Dark” evening parties.